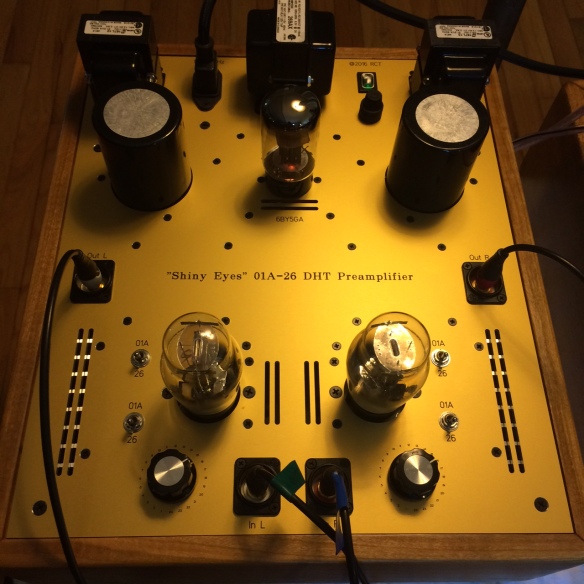 This is an all DHT( direct heated tubes) preamplifier/ line stage.  It has one stage and is built within the same enclosure. This a very good option for anyone who want to try and compare the sound of the early 01A  triode and the 26 triode.

The power supply uses Hammond 269AX for main HV in a quasi choke input 0.47uF(film)-30H(40mA)-47uF(Obbligato Film-Oil)-500ohms-47uF(Obbligato Film-Oil). The rectifier used is the 6BY5GA. HV is supplied with a low ripple which is perfectly adequate considering that the shunt regulator SSHV1 will add at least 80dB PSSR bringing the ripple at extremely low levels ( I could not measure it with my equipment).  The raw power supply for the filament biases are using the Hammond167L12 transformers, 1N5822 and 10mF-2×0.33ohms-10mF-0.1uF-220pF. The two raw filament supplies are delivering up to 1 Amp to the Coleman regulator.  The sense resistor of the Coleman regulator is switched between 1 ohms and 3.9ohms, to supply either 0.91A to the 26 filaments or 0.233A to the 01As.

The preamplifier  uses either 01A or 26 tube. In order to switch between 01A and 26 tubes, there are 2 sets of DTDP high quality mini Carling switches. One of the switches is used to switch between the Rsense of the Coleman regulators, and the second switch is switching the bias resistors placed between one of the filament pins and signal ground ( a permanently connected 30 ohms Mills MRA12 is used to bias the 01A and when switching to the 26 tube there are 2 more 30 ohms Mills MRA12 added in parallel to the 30 ohms( equivalent bias resistor for the 26 will consequently be 10 ohms)), and the anode voltage adjustments of 120V for the 01A and of 155V for the 26.

The anode load of the DHTs is a Mosfet-Jfet inductance simulator which has the advantage to lower the distortion to minimum and higher the amplification to maximum. The input of the preamplifier is DC connected, therefore care must be taken when connect to other audio equipment to make sure that there is no DC to feed this preamplifier. The output is capacitor coupled, using a quality capacitor: the Mundorf  Supreme.

The preamp is provided with volume control using Alps RK27 potentiometers, one per channel. The advantage of using separate volume control per channel is to be able to balance the sound. Tubes can’t be perfectly paired and they also drift differently in time.

The following measurements are only to give you a sense  of the approximate performance. I used a computer software and interface and this comes with some artifacts and noise that are not present when the amp is connected in a audio path. One, if owns high quality audio analyzer, can take more precise measurements